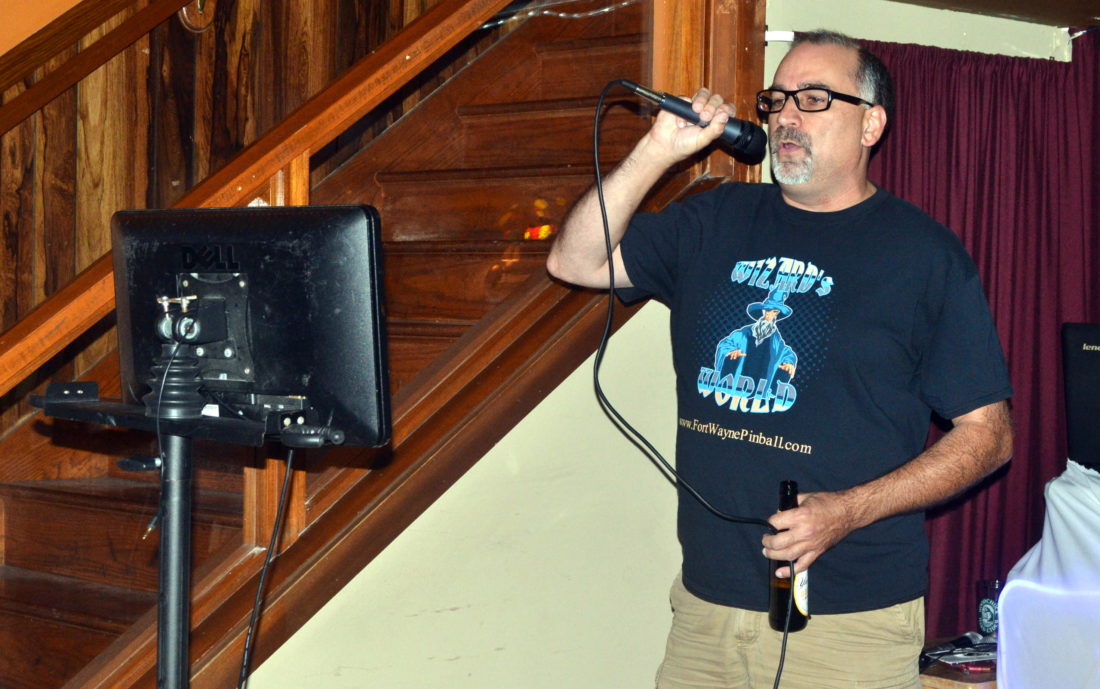 Along with being the Fort Wayne Komets' public address announcer, one of Larry Schmitt's part-time jobs is as a Karaoke DJ at Curly's Village Inn. (By Blake Sebring of News-Sentinel.com)

As he was growing up and going to Bishop Dwenger High School, Larry Schmitt always figured he’d end up in the family paint business for a career. The Schmitt family ran Perfection Varnish Company at 2836 S. Clinton St. for 99 years.

But when the company went out of business in 1998, Schmitt needed to find something else, and though there were plenty of jobs he loved, they weren’t full-time. Luckily, he’s been able to find some of the best part-time jobs. Mainly known as the Fort Wayne Komets’ public address announcer the past 20 seasons, Schmitt, 50, also has worked seven years as a “ranger” for the Fort Wayne Parks and Recreation Department and the last year as league and tournament director for Wizard’s World pinball arcade.

The job he’s had the longest is as a karaoke DJ for his company Tiger Eye Sound, started as soon as he graduated from Bishop Dwenger High School in 1986. His first part-time job was with Wooden Nickel, which allowed Schmitt to start his collection of records. With his mom serving as his producer and first roadie, he played for weddings and parties until he turned 21 and could play in bars, filling in at places like the Bombay Bicycle Club, Our Place and Wrigley Field. Eventually, he found a regular spot at the 412 Club.

The hardest part was finding a consistent schedule that worked around hockey games, but about five years ago he was able to start a regular Wednesday night and frequent weekend gig at Curly’s Village Inn, 4205 Bluffton Rd. He’ll be there Saturday starting at 9 p.m.

Now his collection of songs is more than 150,000, all downloaded on the computer. Transporting everything now is almost as easy as getting people to take a chance and sing, Schmitt said.

“A lot of times you’ll get a person who may seem a little sheepish, a little shy, and those are the ones who tend to come back more often because they want to get better and want to improve,” he said. “I’m a perfectionist when it comes to the music and making sure that if somebody gets up on stage, I want them to sound their very best. I will sit behind and tweak them the entire time they are singing. I’ll mess with the music level, their mic volume, maybe you give them a little bit more reverb. I have some effects boxes that I can actually correct their pitch. I have some stuff that’s real time that people won’t even know. They’ll get done and they’ll sound fantastic and it’s just a slight correction. They can hear themselves and hear that corrected version and it will make them a little bit better singer.”

He also knows if no one else gets up to belt one out, he gets to keep the night moving by singing one of his 500 favorite songs, and he’s had lots of practice so he’s pretty good.

Usually, there are plenty of willing singers, and some have pretty interesting stories. The 412 Club was across the street from the bus station, and one night a man walked in who had been in prison for 30 years. The club was also next to a hotel, and another time an Australian voice actor showed up.

“He was a voice-over artist for cartoons like GI Joe,” Schmitt said. “In the middle of the song he would change up his voice and sing as these different characters. That was unbelievable to have somebody like that.”

Barry Minniefield, who was on “The Voice” in 2015, sometimes sang at Curly’s, and one night a man sang an almost perfect version of an Elvis song. Turns out he used to be an Elvis impersonator, along with his father and brothers. Schmitt and his father John could relate.

“I’ve had some people who could just floor you,” Schmitt said. “They could bring a tear to your eye that they are so good. Sometimes it seems like they are touched by the hand of God with their voices.”

The worst part of the job is when some idiot thinks it’s cute to drop the mic — except they cost $100 each and are very sensitive. So is Schmitt whenever that happens, and he can Hulk out on an offender in about two seconds.

One time, all of Schmitt’s equipment was stolen from his house, but some of his regulars and Komets fans combined to start a gofundme page to get him back behind the computer and mic.

The fun part of the job is when someone approaches and tries to stump him with a song name. That’s only successful with some of the new songs, but usually, no one asks for those. The older songs are still the standards of Karaoke, and he’s always making sure his collection is complete or knowing where to go quickly to find a particular song.

“It’s cyclical,” he said. “Several years ago it was starting to fade out, but a lot of it comes from pop culture where people will hear a song in a movie and they’ll think, `Well I can do that song.’ Pop culture has helped make Karaoke fun again. It’s fun, it’s a challenge and it’s a social thing. So many people are so tight behind their phones and their computers, and this can be their social outlet.”

His job is still about having fun, Schmitt said. He figures he’ll either sign off from this world from either behind the Komets’ or a Karaoke microphone, and neither is a bad thing.

“I just want people to come out and have the best time and feel the most confident they can behind the microphone because it’s not easy,” Schmitt said. “I think it’s kind of fun to give people that four-minute spot where the only thing they are worried about is that little lyric box in front of them and they can just have fun with it.”