Indianapolis Colts: Most intriguing chatter from 2018 training camp so far 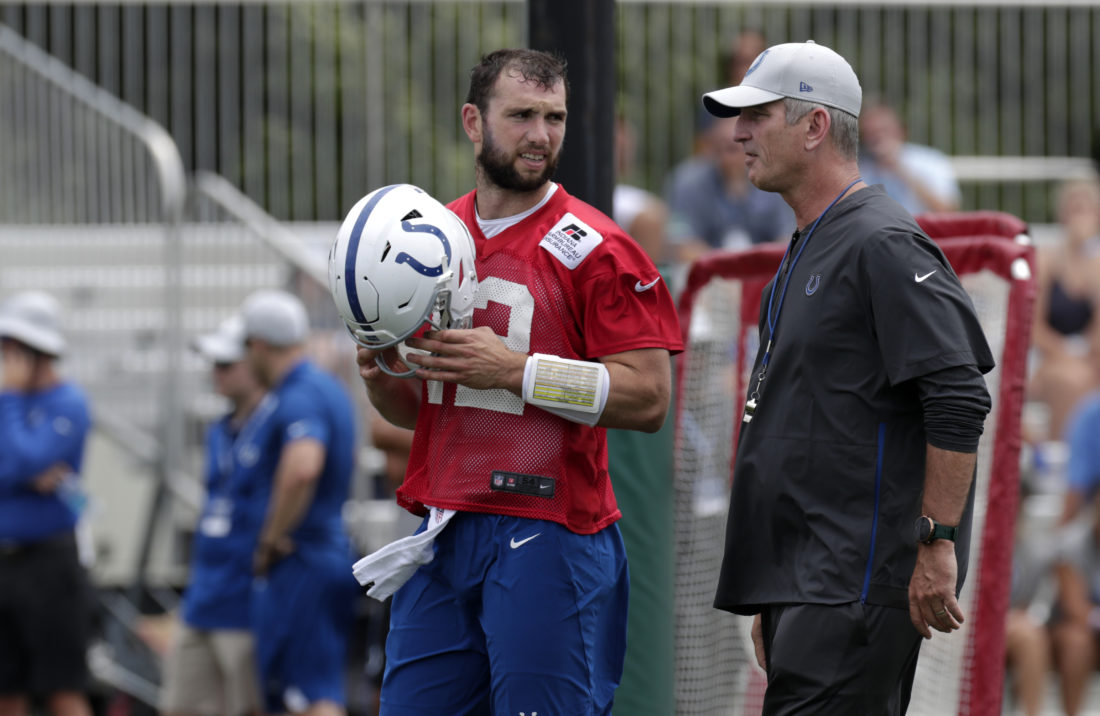 As the Indianapolis Colts close more than a week of training camp, much of the reporting reflects a team embracing a clean slate.

Natural attention has been on new coach Frank Reich, a reinvigorated and seemingly healthy Andrew Luck and a number of no-names seeking to become known names.

Through the first nine days of camp, here are some of the more illuminating comments, via transcripts provided by the Colts’ public relations department:

Reich on camp in general: “I think it has gone great. It’s all about the players. Having Jeff Saturday out here, I think he did a great job of reminding all of us that. Yeah you work hard and try to get good plays and scheme things as coaches, but at the end of the day it’s about players bringing the trust, a juice and an enthusiasm to the field, to the meeting room and I feel like our players are doing that.”

Luck on returning to regular practice: “The second day things seemed to calm down or slow down per se, a lot. I was like, ‘Oh yeah, I remember this. I remember that.’ The first day I was nervous. I was excited. There was a certain element of unknown that I wasn’t quite sure what was going to happen. It was also very fun. It was really enjoyable to be out there with the guys and be able to focus on getting better at practice not just getting through practice and sort of surviving and surviving to the next one. Certain things, especially that second day after getting a day under your belt, I settled in.”

Offensive coordinator Nick Sirianni on if Luck is shaking off the rust of missing a season: “I’ve been on teams that have lost to him. But absolutely, and (the rust is) falling off fast. That’s what’s amazing about him because mentally he’s unbelievable. He can see it. He sees it faster than anyone I’ve ever been around and anyone I’ve ever seen. So mentally, it’s like he never missed a beat. Physically, it’s getting better and better every day. I can’t imagine it can get much better, but I can’t wait until it does.”

Reich on T.Y. Hilton’s route-running and rapport with Luck: “He is very instinctive. He’s got great feel. He’s got great feel. Yeah, I’ve been around a few receivers like that, but the guys that are smart like that and can play instinctive and understand spacing and leverage, they just know how to get open. The body language thing works and Andrew – they’re just completely in sync.”

Rookie offensive lineman Quenton Nelson on Luck: “It’s been amazing. Andrew has been doing a great job. Obviously, everything you heard about him before I got here has been true. He’s exceeded my expectations as a quarterback. I’ve never played with a guy like him. We are really lucky to have 12 behind us.”

Offensive coordinator Matt Eberflus on creating takeaways: “Well you’ll see this weekend Brian Urlacher is getting inducted into the Hall of Fame, and one of his great things was the takeaway. Obviously, (Charles) Peanut Tillman and all those guys played in our system for Lovie (Smith) and (Rod) Marinelli over there so that’s part of our system, and that’s something you’ll see. It’s all really dictated on speed and hitting, and that’s what it is. We’re closing windows with our speed, our athletic ability and our agility, and in the physical style which we play, and that’s what causes a takeaway. What we do is we practice it every single day.”

Reich on T.Y. Hilton fielding some punts in camp: “We just talk about everyone needs to contribute. We’ll play that out. I don’t think the plan is to have T.Y. be full-time punt returner, but he’s really gifted. He’s a great punt returner, the way he fields the ball is as good as anybody. So that’s something he needs to be prepared to contribute and do at some level.”