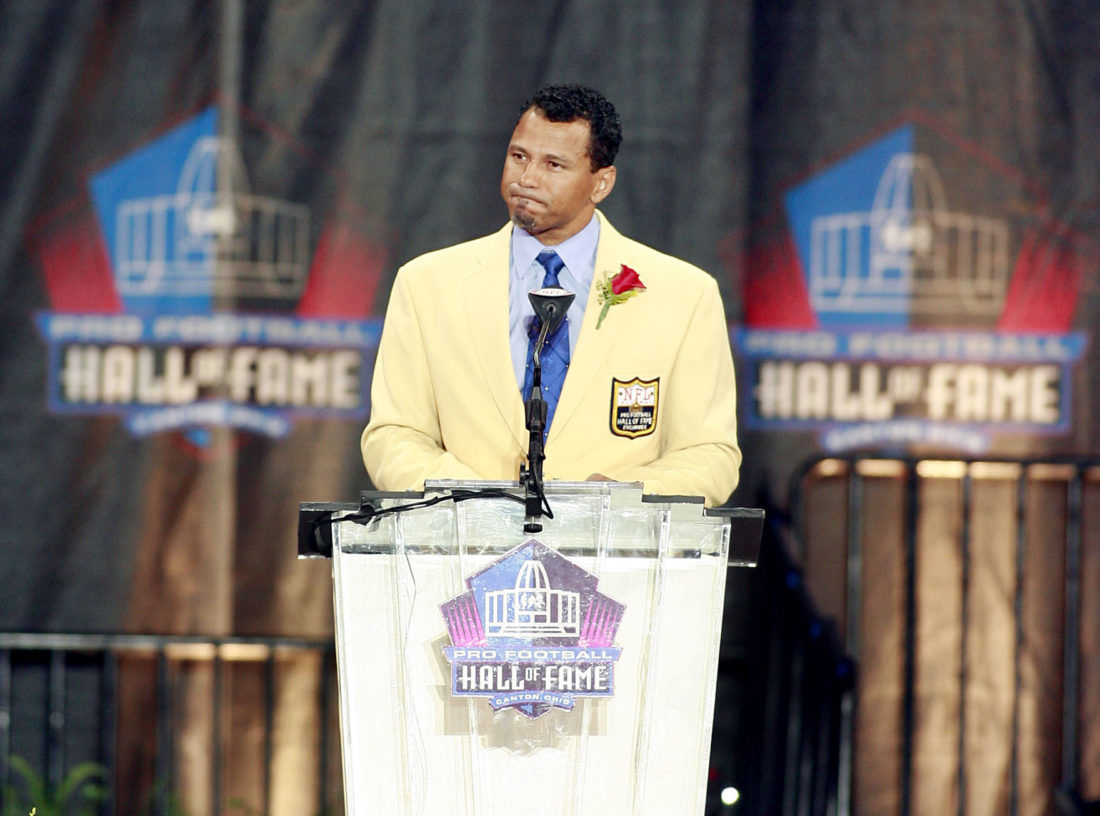 Fort Wayne native and former NFL player Rod Woodson pauses as he gives his acceptance speech in 2009 at the Pro Football Hall of Fame in Canton, Ohio. (News-Sentinel.com file photo)

In 2009, I had the privilege to travel to Canton, Ohio, and cover Fort Wayne’s Rod Woodson as he was inducted into the Pro Football Hall of Fame. I thought about his speech this past weekend as the new inductees took their turns addressing the fans. Woodson’s speech nine years ago resonates even more today in light of the contentious climate in much of the country.

Here’s the column on Woodson’s induction, published on Aug. 9, 2009. Not many columns are relevant nearly a decade later. Woodson’s words make this one an exception:

He was bold. He hit hard. He took no shortcuts.

And he came out a winner.

In a long, poignant speech at Fawcett Stadium, Woodson declared his Christian faith, thanked dozens of people and urged everyone to choose a better, more accepting, way of life.

Woodson, 44, choked up a couple of times but never broke stride. He vowed to thank everyone who had helped him in his life, and he must have come close to meeting that goal.

He started by thanking Jesus Christ, then his parents. Woodson acknowledged Fort Wayne, his coaches and teammates throughout his football career, his employers and co-workers on the NFL Network and, lastly, with emphasis – his wife, children and spiritual mentors.

One of Woodson’s most striking moments came when he talked of his childhood in Fort Wayne.

“I grew up in a small town in the 1960s and 70s in a biracial relationship and it taught me a lot,” Woodson said. “It taught me early in life that people will judge you by your skin color and not the content of your character.

“Society wants you to choose. Are you black or white, are you Democrat or Republican? Remember, God made us all of one blood and one spirit.”

“You people who have mixed marriages, tell your kids they do not have to choose which side they’re on. We always want to choose, but we don’t have to choose. God made you what you are. Remember that.”

Woodson thanked his late father, James, for his direction. He said his father taught him to work hard, stay humble and not take himself too seriously.

“Dad, I never told you how much I learned from you as a father and how proud I am to call you my dad,” Woodson said.

He then thanked his mother, Linda, who was caught on camera with tears running down her face as he talked about how she worried about everything and taught him compassion and love. He told her he loved her. He thanked his two older brothers and told them he loved them, too.

“I love Fort Wayne, it was a great place to grow up,” Woodson said. “It kept me rooted in reality and taught me what was truly real for me and important for me as a man. I really want to thank Fort Wayne for accepting me and embracing me throughout my career, and for accepting my family in Fort Wayne for who we were as people.”

Woodson then went through his football family tree, from his first coach in the Police Athletic League, Dave Rody, through his last NFL owner, Al Davis.

He drew the most response when he reminisced about his 10 years playing for the Pittsburgh Steelers.

“Steeler Nation, thank you for accepting me and cheering me on,” he said, as Steelers fans waved their Terrible Towels. “And, for after I left, for booing me. I’m serious. If you were cheering me when I put on a Raiders or Ravens uniform, then I would have lost a little respect for Steeler Nation. I’m glad you booed me, because you should.”

Woodson earned some boos from the Canton crowd when he praised Baltimore owner Art Modell, who moved the Browns out of Cleveland. Woodson said Modell belongs in the Hall of Fame, and made a plea for Steelers defensive coordinator Dick LeBeau’s induction, too. Woodson also said he expects Tony Dungy, his one-time defensive coordinator at Pittsburgh, will be in the Hall.

“You Steeler fans, you booed me when I went to the Raiders, too – real bad – but I love you anyway.”

Woodson thanked his five children, as they wore various jerseys from his days with the Steelers, 49ers, Ravens and Raiders. He especially thanked his wife, Nickie, for sticking with him through his “good, bad and ugly.”

Tracy Foster, Woodson’s longtime friend who presented him for enshrinement, talked about Woodson’s character and how humble and unassuming he is, and how he has always been a “reluctant celebrity.”

Woodson may be a reluctant celebrity. But he embraced his opportunity to speak from the heart in Canton.

As he finished off his speech, he challenged the audience.