Barry Wilner of The Associated Press 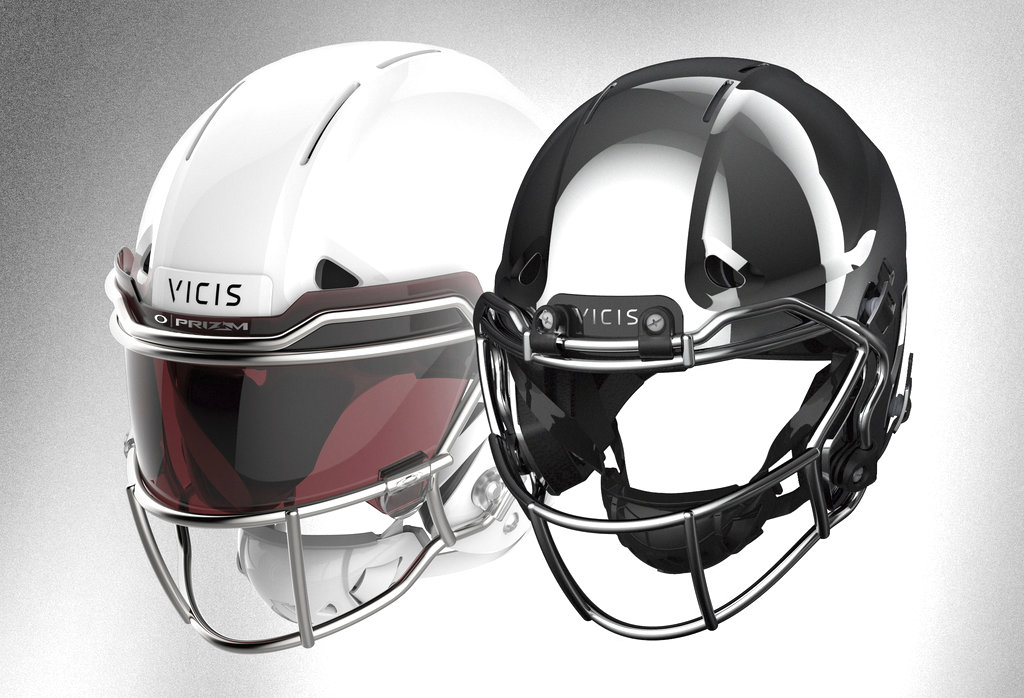 This image provided by VICIS show the VICIS Varsity helmet for the pros, left, and the Youth helmet that will be available in 2019, right. As the NFL seeks remedies for injuries caused by helmets by spending millions of dollars and hour upon hour on research into safer equipment, the same search goes on at other levels of football. (VICIS via AP)

As the NFL seeks remedies for injuries caused by helmets by spending millions of dollars and hour upon hour on research into safer equipment, the same search goes on at other levels of football.

VICIS, which has the top-rated helmets for the pros, according to an NFL survey, is getting into the youth market. Riddell, which has a tie-in with USA Football, the governing body of the sport, is also devoting much time and funding to youngsters playing the game.

Chris Golic, whose husband Mike played eight seasons in the NFL and whose sons played through college, has been working with VICIS to educate parents on the strides being made in player protection. Many mothers and fathers have become familiar with the Heads Up Football program USA Football created to get the head out of the game when tackling, as well as with the organization’s requirements to approve coaches.

“The next step was looking at equipment,” says Golic, who serves on the Pop Warner board, and was the NFL’s consultant on youth football as well as a member of the Heads Up Football advisory committee. “So much had not changed in so long, it was the next piece to the puzzle.

“I heard how VICIS was highly rated (for the NFL) and how they were manufacturing their helmets and a youth helmet, and I was excited. For so long, parents complained there was just an adult helmet put on a kid, or whatever was around. I can speak for VICIS, who changed their approach and looked at how a helmet is supposed to fit and what is needed to make it safest.

“I talk to moms all the time and the most important thing is making sure equipment fits properly … helmet, shoulder pads. We want to keep the conversation going so they see we are not standing still.”

Equipment manufacturers are doing anything but standing still, as both the VICIS ZERO1 YOUTH, which will become available next year, and the Riddell InSite Training Tool show.

Traditional youth football helmets are adult helmets with lightweight shells. But ZERO1 YOUTH is engineered specifically for young players and the impacts they typically encounter on the field — impact velocities and locations. The exterior shell is redesigned for younger players’ anatomies, while the liner provides a custom fit for a wide range of youth head shapes and sizes.

“At its heart, VICIS is an engineering company born to innovate,” says Dave Marver, the company’s co-founder and CEO. “Our focus is sports protective equipment, particularly helmets. This is just our second year on the field and we’re pleased to have broadened our portfolio to include the ZERO1 YOUTH. One of our founders is a pediatric neurosurgeon and, though we started with NFL players, our passion has always been to protect kids. We will be introducing new products in football and several other categories in the next year.”

One issue with the helmets can be cost. Benefiting from increased volumes, this season VICIS reduced the price of its ZERO1 helmet for pros, colleges and high schools, called varsity, to $950. NCAA and high school programs that purchased the ZERO1 in volume qualified for pricing under $800 per helmet. VICIS expects the ZERO1 YOUTH to cost under $500, about half the price of its varsity helmet.

Riddell’s InSite Training Tool, which the company’s Thad Ide calls “a game changer” in helmet technology, provides such specific data that it is applicable at the youth, high school, college and pro levels. Basically, it tells observers if an out of the ordinary impact happens on the field.

Such feedback is priceless for player safety.

“We invested in this back in 2004 and we’ve been monitoring its use at different levels of play,” says Ide, Riddell’s senior vice president of research and product development. “That data is used to inform the InSite technology, and we launched into the marketplace in 2014 as an alerting and monitoring device … another set of eyes. This year we are launching the training tool with a much broader sweep of capabilities to help coaches understand when players are seeing out of the ordinary impact exposures that could be potentially very injurious, such as hits with the crown of a helmet.

“This is kind of the step function in the awareness, and a way of bringing data analytics to football in a way it has not been there before. During any conversations with coaches or anyone associated with football programs, and as we explained all the capabilities, it’s been a very eye-opening conversation, and we can sense the engagement and excitement. This is the front of something really exciting here.”

Chris Golic believes so. She hears the concerns from parents about such a collision-based sport, hears them cite numbers — some accurate, others way off — about drops in registration for youth players.

Then she looks at her family’s experiences in football.

“Regardless if the numbers are up or down, I want parents to self-evaluate and look at the sport and say, ‘Why should my kid be playing? I saw differences the sport can make in work ethic, dedication and perseverance, teamwork, getting along with others.

“Personally I am worried if (parents) want to just dismiss it and say their kids shouldn’t play. The solution is not to not play, it is to find ways to make it safe to play.

“Look beyond the headlines a bit and make decisions based on fact and not fear.”