Easier gambling has sports worried about fighting the fix

David Porter and Regina Garcia-Cano of The Associated Press 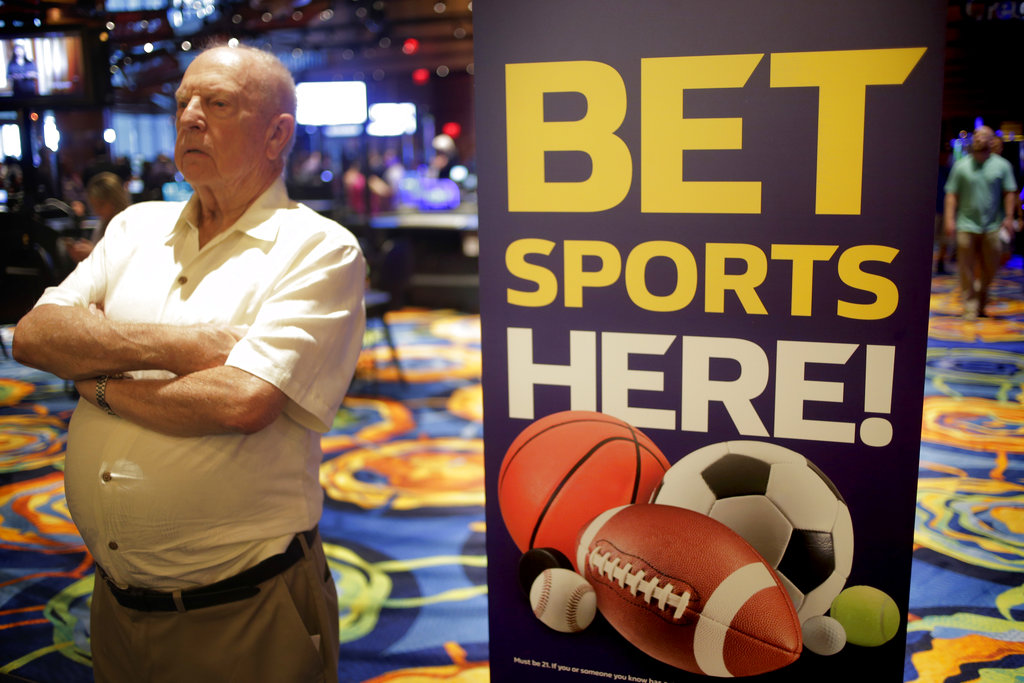 FILE - In this June 28, 2018, file photo, a sign advertising sports betting is displayed at Ocean Resort Casino in Atlantic City, N.J. The four major pro sports leagues and the NCAA think that expanding legal betting will lead to more game-fixing. The architects of New Jersey’s successful legal challenge to the sports gambling ban say those fears are overstated and that bringing sports betting out of the shadows will make it easier to detect illegal activity. (AP Photo/Seth Wenig, File)

OCEANPORT, N.J. — It’s early in a college basketball game and Team A, playing methodically and using up most of the 30-second shot clock, falls behind 10-6. Scattered around the bleachers, several fans staring at their smartphones celebrate silently: they have bet on Team B to be the first to reach 10 points and even promised two Team A starters a cut of the winnings.

With dozens of states rushing to capitalize on the U.S. Supreme Court lifting a federal ban on sports gambling, will fixed scenarios like the one above become more common?

The four major pro major sports leagues and the NCAA think so, and have argued for years that expanding legal betting will lead to more game-fixing. The pro leagues have sought, unsuccessfully so far, a cut of state gambling revenues to increase monitoring.

Meanwhile, architects of New Jersey’s successful legal challenge to the sports gambling ban say those fears are overstated and that bringing sports betting out of the shadows will make it easier to detect illegal activity. They point to the Arizona State basketball point-shaving scandal in the 1990s, which was uncovered after legal bookmakers in Las Vegas noticed unusually large sums being wagered on Sun Devils games.

Yet the prospect of easy, legal access to sports gambling for athletes and others has many in sports concerned.

College athletes are generally considered easier to convince than pros to influence games. Two reasons: they are younger and aren’t paid directly to play.

They also aren’t strangers to wagering.

A 2016 NCAA survey of more than 22,000 college athletes found nearly one-fourth of male athletes had violated NCAA rules by gambling on sports within the previous year. When the survey was done, sports betting was available only in Nevada or illegally through offshore operators.

It was another number that surprised the authors: 13 percent of the male athletes who had gambled on sports had wagered on in-game bets, things like whether the next football play will be a run or a pass or of a basketball player will hit the next free throw.

“We continue to have concerns that wagering enhancements such as live in-game betting could present increased opportunities to profit from ‘spot fixing’ a contest as has been uncovered recently in a number of international sports leagues,” the study concluded.

Individual schools make sure athletes know the rules against gambling, sometimes bringing in law enforcement officials or former players to get the message across.

Will it be enough as laws change?

Legal sports gambling was the No. 1 topic for every conference meeting this spring, said Bob Vecchione, head of the National Association of College Directors of Athletics.

“Do you remember back when you were 18 to 20 years of age?” said Vecchione, the Minnesota athletic director. “When people told you something, how much did it sink in? That’s what causes some sleepless nights.”

NCAA officials have said they may consider adjusting rules to account for legal gambling but haven’t specified how.

Anderson recounted his experiences in the Boston College football scandal in a 2016 book, “The Best Bet.” In a recent interview, he described a culture in which gambling was part of the daily routine.

“You went to practice and you got your spreadsheet in the locker room,” he said. “It was nothing to sit there on the sidelines and say, ‘Who you got this week?’ That’s what you do. You’re playing football, watching ESPN, seeing other teams and you’re totally engaged. It was too easy.”

While no players were alleged to have compromised their performances in games, Anderson — who was injured and did not play during the 1996 season — and other players incurred debts betting on other sports and tried to recoup their losses. Some bet against BC against Syracuse and star quarterback Donovan McNabb. Thirteen players were suspended.

Rutgers athletic director Patrick Hobbs had a front-row seat to New Jersey’s successful challenge to the 1992 federal sports betting ban. Now, New Jersey sports books are prohibited from taking wagers on college games played in the state or involving schools from the state.

With inside information being so key to betting markets, any tidbit — say, a student telling friends that his roommate, the star quarterback, just had a fight with his girlfriend — can take on greater significance.

That highlights the need for more education, Hobbs said.

“We’ll educate on a variety of scenarios and hypotheticals, and say, ‘Hey look, this may have sounded like an innocent question in the past, but now you have to be careful with that information,'” Hobbs said.

Proponents of legal sports gambling often point to Nevada as a model for effective monitoring. Sports betting has been legal in Las Vegas in some form since the 1930s.

If regulators there are notified of suspicious betting activity, agents from the Nevada Gaming Control Board can open an investigation or work with federal and local authorities if it involves multiple jurisdictions.

Karl Bennison, the board’s chief of enforcement, said board agents also meet and work with professional leagues, teams, the NCAA, conferences, universities and sports associations, including the International Olympic Committee, to discuss and educate athletes, coaches and others on integrity matters and illegal activity.

Reports from oddsmakers in Las Vegas have played key roles in the uncovering of illegal sports betting schemes, including the case involving two Arizona State basketball players fixing four games during the 1993-94 season.

Stevin “Hedake” Smith and Isaac Burton Jr. admitted to shaving points — purposely holding the score down with mistakes or missed shots — for $20,000 per game. They were partly trying to erase a reported $10,000 gambling debt to a fellow student who also booked bets.

Las Vegas bookmakers reported suspicious betting activity when gamblers placed about $900,000 in bets against Arizona State on a meaningless contest against Washington. The heavy betting caused sports books to change Arizona State from a 10 ½-point favorite to a 3-point favorite.

“You might write $30,000 or $40,000 total on both sides of that game under normal conditions,” Jimmy Vaccaro, then-sports book director at Mirage Resorts, told The Associated Press. “We wrote $560,000 on that game. The people thought the fix was in and ended up blowing their money.”

Scandals like that are rare, but sports book operators say other situations could raise red flags, such as a bettor refusing to show an ID when trying to place a bet, or attempting to place large bets without a prior history with a particular casino.

Jay Kornegay, sports book director at the Westgate Las Vegas, said that in those instances, the books would look at what happened in that game, including suspicious plays and performances. If the oddsmakers think something is going on, they can refer it to regulators.

OUTSIDE THE UNITED STATES

Legal sports betting has been a part of the landscape abroad for years, and so have gambling-related scandals.

The sport most susceptible to match-fixing or manipulation, however, may be tennis. A report published in April by an independent panel found “betting-related corruption and other breaches of integrity have taken firm root” in the sport, particularly in the lower and middle levels of the men’s game.

The report cited the sheer number of matches worldwide — 115,000, it estimated — many featuring little-known players and lax monitoring. It also pointed to a decision several years ago by pro tours to sell live scoring data, which created more opportunities for legal sports books to offer in-game wagering.

In the four months since the report was issued, several men’s players have been suspended, two for life, and authorities in Belgium detained more than a dozen people on suspicion of fixing tennis matches.

The suspensions grew out of investigations by the Tennis Integrity Unit, formed by the sport’s governing bodies in 2009.

Joe Asher, chief executive of London-based bookmaker William Hill, said many scandals would stay in the shadows if bets are placed illegally.

“The illegal bookie isn’t picking up the phone and calling the FBI, he’s just going to try to get on the same side of the bet,” Asher said. “So that’s the difference between the black market and the legal market that exists today.”