Noah Trister of The Associated Press 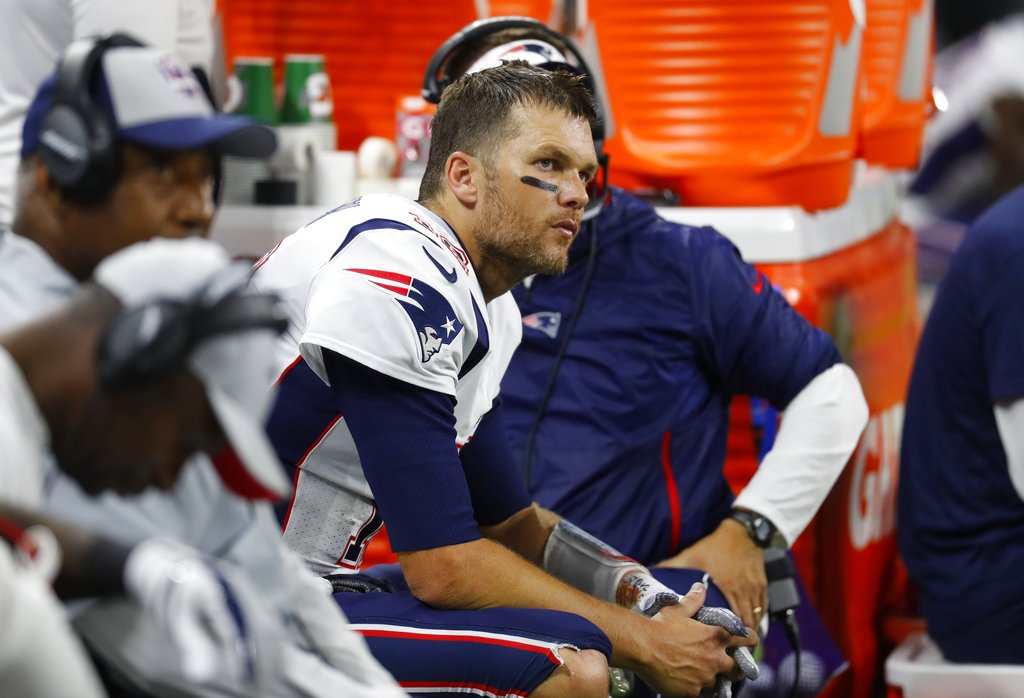 New England Patriots quarterback Tom Brady sits on the bench during the second half of an NFL football game against the Detroit Lions, Sunday, Sept. 23, 2018, in Detroit. (AP Photo/Paul Sancya)

DETROIT — Tom Brady isn’t the type to panic over a couple early losses.

He’s also not making any promises about where New England’s season could go from here.

Brady was held to 133 yards passing Sunday night, part of an abysmal performance by the Patriots in a 26-10 loss to previously winless Detroit. New England barely mustered 200 yards of total offense, and Brady spent most of the game on the sideline as the Lions ran up a huge advantage in time of possession.

There’s certainly plenty of time for the Patriots (1-2) to snap out of their funk, but even a team with their track record isn’t guaranteed anything.

“We’ll see,” Brady said. “I’m not going to make predictions. It’s about hard work, it’s about commitment, it’s about being disciplined, it’s about doing the right thing. Obviously, we’re not doing a great job of that.”

After a loss to Jacksonville the previous weekend, the Patriots came out flat against Detroit. With 4:58 left in the second quarter, the Lions led 13-0, and that didn’t do justice to Detroit’s domination. At that point, the Lions had massive statistical edges in first downs (14-0), yards (196-13) and time of possession (20:46-4:16).

New England scored the next 10 points to pull within three, but Matthew Stafford’s 33-yard scoring pass to Marvin Jones in the third quarter made it 20-10.

Brady was held to his fewest yards passing since Dec. 28, 2014, when he threw for only 80 in a loss to Buffalo. Brady split time with Jimmy Garoppolo in that game, after the Patriots had already wrapped up the division.

On Sunday, New England went three-and-out on its first two possessions, and Detroit (1-2) was able to establish its long-dormant running game, keeping Brady off the field. Rookie Kerryon Johnson ran for 101 yards for the Lions, their first 100-yard rusher since Nov. 28, 2013.

“There’s no magic play you can call. It just comes down to execution — throwing and catching, and converting on third down,” Brady said. “It’s not one thing, it’s everything that we need to do a better job of.”

With Josh Gordon inactive and Julian Edelman still suspended, Brady didn’t seem to have enough targets. On one play in the fourth quarter, he threw a deep pass over the middle and no New England player was anywhere near the ball. That apparent miscommunication led to an intentional grounding flag that helped derail another possession.

It was the first time the Patriots lost back-to-back games by double digits since December 2002, according to ESPN Stats & Info. New England had a bumpy start to last season as well, dropping two of its first four games. The Patriots recovered well enough to make it to the Super Bowl, but right now they’re searching for answers once again.

“We’re not scoring enough points. We’re not executing well enough on a down-by-down basis,” Brady said. “There’s been a lot of talk about it in practice, and we’re going through it and watching film and correcting stuff. It’s just not getting done on the field.”